How to Compress Files without a Filesystem Support

Zipping files is essential to save space and memory when working on a platform as big and complex as BOOM, which handles thousands of files on a daily basis and therefore must optimize space and resources in order to provide an efficient experience. However, compressing files is a tough task, especially when you don’t know how much space you will need in advance. Working in a cloud environment also brings out new challenges when handling data, as a file system is something that is not included by default in every cloud environment, and it impacts the pricing of the services we’re using.

As a developer, it’s our responsibility to get things done efficiently while being mindful of costs, and luckily there are ways to get around the file system!

I recently found myself having to translate an old procedure from python to java (kotlin, actually), whose purpose was to download pictures from a third-party supplier and then save them on our S3 bucket, zipping them together once the process was done.

The old procedure simply wasn’t effective. First of all, it required a temporary filesystem to store the images and the zip file. Secondly, since we deal with a good deal of resources at once (each photoshoot requires around 10s of Gigabytes of data) we had to make sure that the container that took care of doing the job had enough space and memory to work successfully at any given moment.

Since we could move this procedure into a single microservice that took care of the whole picture editing process, there surely had to be a better way to handle this use case without having to rely on a filesystem and using as little memory as possible. I then ventured into a journey made of trial and error which proved to be a valuable learning experience.

The first instinctive approach that came to mind was using Java’s streams, of course. This would surely have reduced the impact on the JVM and gotten rid of our data persistence needs.

In a way, it made sense. The first part - downloading pictures as a data stream and uploading them to S3 - worked perfectly thanks to the S3 SDK and a bit of abstraction.

The code to upload something with the SDK looks like this:

"Content length must be specified before data can be uploaded to Amazon S3. If the caller doesn't provide it, the library will make the best effort to compute the content length by buffering the contents of the input stream into the memory because Amazon S3 explicitly requires that the content length be sent in the request headers before any of the data is sent.”

As such, it’s quite apparent that the “metadata” object needs to have the content length specified, which in this first stage was not an issue at all, using some HttpOpener class that provided the data stream and its length, which could then be passed on to the S3 API:

This proved to work well: during the download/upload phase, the memory usage was constant.

The real issue came when trying to zip everything back to S3. In theory, the working principle went as follows: 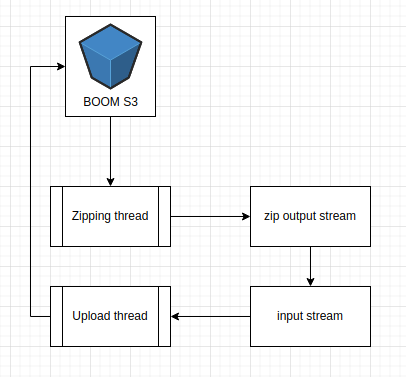 In practice, there were two major drawbacks / learning moments:

The second point was quickly solved by using the getObject function lazily (so only when we had to process that particular file), and manually closing the resource afterwards.

The first problem was solved by exploiting the multipart upload and Java’s utilities PipedInputStream and PipedOutputStream in the following way:

First of all, let’s summarize the elements that we need to get the job done:

The zipping thread is spawned by means of a CompletableFutureto simplify things, and manages the data that goes inside the zip stream:

As mentioned before, for each key in our list, we lazily get the object and put the data from the entry to the zip stream.

And finally, the upload thread is spawned with a CompletableFuture as well, and takes care of using the data from the input stream, after initiating a multipart upload request towards S3.

This is a bit more complex yet pretty straightforward:

The main question you might ask at this point is: why use two different threads? The answer is simple: to use the piped streams efficiently we need data to be constantly “pumped” in and out of the stream, so that memory consumption remains low.

Tests were made by spawning many threads running the upload function with a total image size of roughly 40Gb for each run, and it was run both on a development machine and in a Docker container with just 1Gb of memory available, with no occurrence of out-of-memory issues.

The following is the memory consumption of the service in our production environment, while it was running the zip of a ~40Gb file, in parallel with other smaller compression jobs: 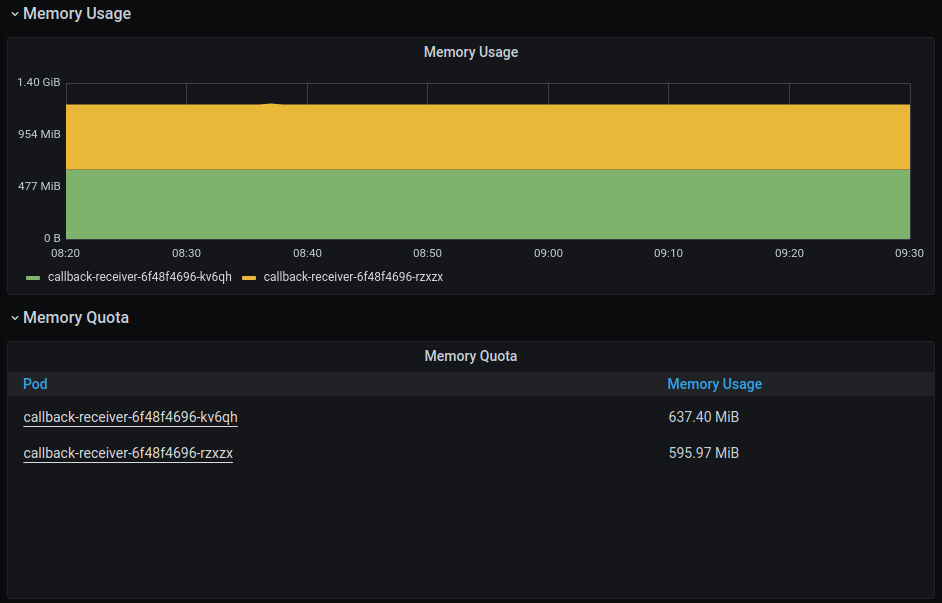 As you can see, the memory usage during the whole process (that started at 8:30 and ended at 9:30) was constant and had no peaks. The application runs with the Spring Boot framework, on a docker container, and the baseline of the memory occupied by the server is in the 600Mb range when not doing anything.